"My tummy hurts" is something I hear daily (or multiple times each day). Ever since GirlyGirl could talk, she has complained about her tummy hurting.

When she uses the word "hurt," it's hard to know what she means. Sometimes she means something itches, sometimes she's hungry, or sometimes she needs to use the bathroom. Or anything in between. She would usually complain first thing in the morning, so I would tell her she would feel better after breakfast. She would complain at other points during the day, but when she was preschool age, she was unable to describe how she was feeling. In the past year or so, she hasn't mentioned it as often. I figured she was starting to understand when she was hungry or full or whatever else was going on so she didn't feel the need to tell me it hurts all the time.

A few days ago we were on our way to a doctor appointment, and she told her brother we were going because her tummy hurts. That was not why we were going, and I wondered why that's what she thought. With further prodding, she explained that the hurt she feels is like she has to throw up. All the time. She said she does her best to ignore it so she can enjoy playing with her friends. My heart sank and broke in two. This poor girl is living with nausea every day.

I felt absolutely guilty and horrible about brushing her off all this time. Now, I've not been completely neglectful, as I have mentioned it to her pediatrician on more than one occasion. I have also asked her repeatedly what makes her tummy hurt in order to get a good handle on what she's feeling. She also is full of energy and has a smile on her face most of the time, so I didn't know she was in constant pain.  I think she is finally old enough to articulate exactly how she feels.

So now what? I have once again brought it to her pediatrician's attention. He wants yet another abdominal x-ray. We had one a year and half ago, but didn't really find anything of significance. We will get the x-ray next week, but we are also going to begin a gluten-free diet. There is so much   physical discomfort related to gluten, so I figure it's worth a try. After all, Bubs is already gluten-free. Switching her over won't be that difficult. Stay tuned for updates.... 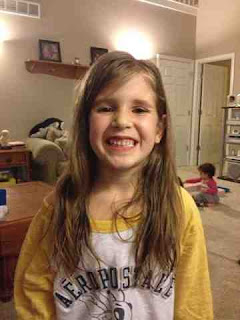 Email ThisBlogThis!Share to TwitterShare to FacebookShare to Pinterest
Labels: My Monkey Stories