A Trip to the Allergist

It has been a while since Bubs and GirlyGirl have visited the allergist.  Bubs hasn't been for over 2 years since we got involved with his elimination/rotation diet (read about it here).  He had some blood work done then back when we started that adventure, so we knew his milk, egg, and peanut numbers hadn't come down.  And GirlyGirl hasn't been tested since her original diagnosis 2 1/2 years ago.

But I decided it was time to make the appointment and take them both in for a checkup.  We visited earlier this week and are awaiting results from the blood tests.  I'll be sure to post more when we know more.

In the waiting room there was a sign posted asking people to refrain from sharing or exposing food.  I love that!  I wish everywhere was so comfortable! 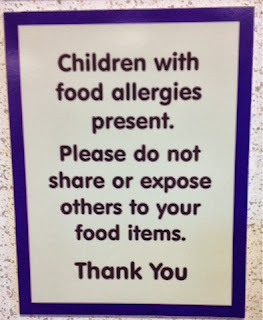 A nurse did the initial questioning and asked about GirlyGirl's previous reaction to peanuts.  When I told her the reaction was actually to a walnut muffin and that walnuts came back negative and peanuts positive, she looked confused.  Maybe she isn't familiar with cross-contamination?

When the doctor was asking about Bubs food allergies, I explained that he is anaphylactic to milk, eggs, and peanuts, but that we are avoiding other foods for behavioral issues.  I showed him the three page list of results we obtained from blood work done by the naturopathic doctor and told him it was IgG and IgE testing.  He very politely explained that that is a different school of thought and that he was only interested in the anaphylactic foods.  I realize they are different schools of thought, and that these other foods won't cause him to die, but he wasn't even the slightest bit interested in hearing about it.

Later, another nurse came in and was chatting with us, and I briefly mentioned Bubs' elimination/rotation diet.  She took great interest as her son has been diagnosed with ADHD, and she uses a combination of medication and diet to help.  I suggested she look into the elimination diet options further with the possibility of eliminating meds altogether.  She seemed genuinely interested in hopes that her son wouldn't be tied to meds for an extended period of time.  Really, who wants to medicate their children?

One thing I was really excited about was having the chance to play with the Auvi-Q trainer.  What a neat device!  It is much more compact than the EpiPen, but you would still have to carry two.  They should make a device that has two auto-injectors in the same case.  With today's technology, it shouldn't be that hard!  My hesitation for carrying and distributing the Auvi-Q is that it is not as common as the EpiPen, and others may not recognize it as my child's life-saving medication.  I have a mental image of the school nurse or other school staff opening the cupboard to get epinephrine and not recognizing the Auvi-Q, but looking for an EpiPen.  One more block/area of hesitatation.  I am planning on filling their Auvi-Q prescription and carrying it with me, but leaving the EpiPens at school and after school care.  At least until it is more mainstream.

Another exciting thing that happened was my kids were selected to be part of an asthma research study.  They are comparing kids with allergies and asthma to kids with asthma only.  The study would consist of a few hours at the children's hospital where some histamine gel would be applied to their forearm.  An ultrasound would be used to monitor how the body's blood flow reacts to the histamine.  A skin prick test would also be performed testing 22 environmental allergens.  Finally a blood sample would be taken to test DNA.  In return, they would receive a $50 gift card to Walmart or Target, $10 for the skin test, and mileage reimbursement.  Sounds like a good deal to me!  The kids, on the other hand, are not so excited.  They are a bit hesitant.  I will continue to discuss the benefits of this study and how they can help others by participating, as well as the financial gain they will receive.  I'm not sure the bribe of money is enough to offset the cost of a skin prick test and blood draw in their eyes.

I forgot to ask the allergist if their clinic is participating in any of the oral immunotherapy for food allergies.  I will be sure to ask when we call about the results.  I'll keep you posted!