Update on Bubs and His Diet

We have known about Bubs' life-threatening allergies to milk, eggs, and peanuts since he was a little bitty thing.  But two years ago we had our food world rocked with some major dietary changes.  Due to some challenging behaviors, we ended up putting him on a elimination/rotation diet.  You can read more details about our journey here and here.

After testing for almost 200 foods and finding sensitivities to over 50 foods, we faced a new challenge on how to feed our son.  But with some helpful guidance and lots of planning we fell into a good rhythm.  And once we got the hang of things, meal planning and preparation actually became quite simple.

We were given the go-ahead by our nautropathic doctor to try adding new foods, one at a time over an extended period of time, to see if Bubs' system could handle these foods.  After all, with so many positive results, there was a strong possibility that many were false positives.  His system was so screwed up that it was fighting many foods.

We noticed an immediate change in Bubs' behavior with the diet change.  And over the past two years, we have gradually added many foods back into his diet.  At this point, the only foods we are eliminating are the obvious milk, eggs, and peanuts as well as gluten and soy (and artificial colors).

His behavior continues to be age-appropriate and non-aggressive.  (The only real trouble we have with him is the constant arguing with his sister!)  I am a bit hesitant to try adding soy or gluten back into his diet because those are known to be major offenders in general.  So for now we will just continue to eliminate those five foods.

What a relief it is to have more freedom when it comes to feeding my child.  We were managing okay with the major restrictions, but Bubs was getting really sick of eating the same foods every four days.  And I can't say that I blame him.  So we are back to making fun, flavorful meals, and Bubs is enjoying it and tolerating it well! 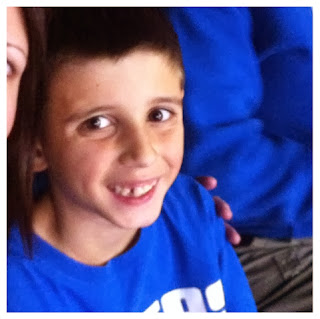