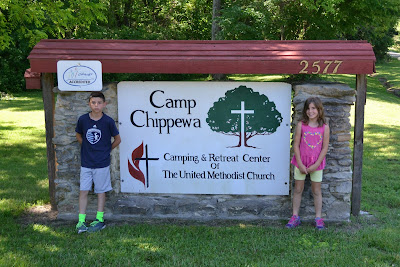 One of my favorite childhood memories was going away to a week long overnight summer camp.  We got to swim, do archery, sing songs, camp under the stars, make new friends, etc.  This is something I have always wanted my kids to experience too.

Most typical activities are more challenging when food allergies are involved.  This is compounded when the plan is for these kids to be away from home for five days without a parent around.  Luckily, there was a parent from our church who would be at camp with my kids for the whole week (our church sent a small group of kids to this camp).  She knew some general info about my kids' food allergies, but she needed to know more  She willingly met with me prior to leaving for camp so I could really give her the low down.

About two months before the camp began, I spoke with the camp director on the phone, and he told me that I could provide all of my kids' food.  He told me that I would get the menu about a week ahead of time so I could prepare similar food.  He also told me that they wouldn't offer peanut products the week we would be there.  He couldn't guarantee that everything would be "peanut-free" since they may use some products that may have been processed with peanuts.  But they would do their best to eliminate straight peanut products.

With this knowledge and knowing that an educated adult would be there, I eagerly signed the kids up.  For the next two months, I kept telling the kids how much fun they would have at this camp.  But deep down, I was having anxiety about their food.  New experiences are difficult, especially if I can't be there.

The weekend before they left, I spent lots of time in the kitchen preparing a week's worth of food, packaged and labeled for easy reheating and serving.  I did my best to make it easy by labeling each container with which food it contained for which day/meal and for which kid.  I had bags of dry food, each labeled in the same fashion.  I felt confidant as we headed down the road to camp on Monday morning.

Drop off was at the Dining Hall.  There were camp counselors and nurses there.  As soon as I said our name, the nurses knew right who we were.  She took our EpiPens and inhalers and told us she would escort me to the kitchen once I got the kids settled in their cabins.

After giving my kids a big hug and kiss goodbye, I found the nurse and we headed to the kitchen.  This is where I got nervous.  It didn't seem as if these three ladies (working in the kitchen) were expecting me.  Also, the first meal was supposed to be tacos, but they were making grilled ham and cheese.  When I asked about it, they simply said they had to switch around a few meals.  I got flustered because I had labeled everything by day and meal to match their menu.  I was trying to make it easy, and now things wouldn't line up right.  The adult from our church was with me and said, "It will all work out.  I'll help them get it straight."  I was thankful for that voice of reason.

During my explanation of all the food stuff to the kitchen staff, I also mentioned that they need to wash their hands before handling my kids' food because of cross-contamination.  I got lots of blank looks while I was talking to these ladies.  My anxiety grew as I continued to talk.  One of the gals said that they have a peanut butter bar at each meal.  Before she could say anymore, I said that the camp director had told me that this week would be "peanut-free."  She said that was fine, and she would wipe down the counter where they usually have that set up.

It seemed to me that there was a breakdown in communication somewhere.  If it weren't for this parent volunteer, I would have been a wreck and spent a lot more time there talking to all the staff.  But she kept me calm and told me she would look out for my kids.

I left the camp, feeling very uncomfortable.  The parent volunteer told me she would text updates to me each night so I would know everything was OK.  She texted me later that day saying that following lunch (their first meal), she met with the camp director and nurse, and they decided to move all of my kids' food to the staff fridge, and she would be in charge of reheating and serving my kids' food.  This would completely eliminate having to rely on the kitchen staff .  They also decided that all the kids at camp would wash their hands after each meal to help prevent a reaction.  :)

What a huge relief that was!  After receiving that text, I didn't worry a second more!  I enjoyed my week home with my little girls while the big kids had a blast at camp.  And they created all sorts of wonderful new memories that will last a lifetime!

I'm so glad I took the leap to send my kids with food allergies away to summer camp.  It's scary for all of us, but so worth the experience!  They can't wait to go back next year!
Posted by Unknown at 1:25 PM